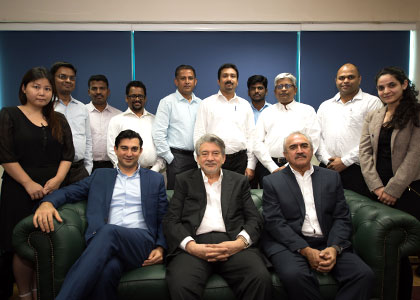 Mr. Rajan. K. Lall’s journey as a self made entrepreneur spans nearly 4 decades and is deeply entrenched in his expertise in the garment trims industry. ITL Industries, which was established in 1970, with a nominal investment of $12, grew to become a brand synonymous with the word interlining and to one of the largest suppliers of interlining in India. It was purely the vision and drive of Mr. Lall that resulted in a successful interlining empire with branches & warehouses in all the 5 main garmenting centers of India (Delhi, Mumbai, Bangalore, Chennai & Tirupur). He was fondly known as the “King of Interlining”.

The next phase in his journey came about in the form of an offer from the Tyco group of companies for a joint venture for one of their companies, A&E Products. Leveraging on the ITL Industries network, the new venture took off to a flying start and the company’s phenomenal success brought Mr. Lall an opportunity to cover the Middle East region as a licensee operator. The rest as they say is history. GTA was established and under Mr. Lall’s leadership, it rapidly grew to become the largest manufacturer of plastic hangers in the region within a matter of just a few years.

His journey continues unabated as he charts the company’s growth story with expansion plans and the addition of new sectors under the GTA banner.